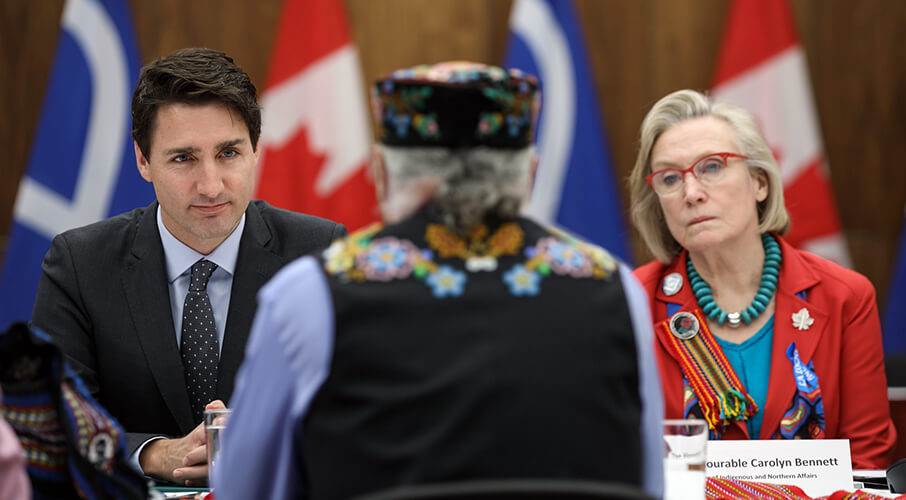 In the current circumstances, where UNDRIP is seen as an anti-development mantra, the constructive potential of the United Nations Declaration will almost certainly be lost, along with thousands of Indigenous jobs, countless business opportunities, and the much-desired financial independence of First Nations communities, writes Stephen Buffalo.

The Liberal government of Prime Minister Justin Trudeau, to its credit, is deeply committed to Indigenous communities and reconciliation.  The government has discovered that the path to harmony between Indigenous and other Canadians is much more complicated than it assumed.

For instance, the prime minister’s attempts to link Indigenous rights with an aggressive climate change agenda has proven particularly problematic, an effort that could become more challenging if it proceeds incautiously with the implementation of the United Nations Declaration on the Rights of Indigenous Peoples (UNDRIP).

The government has, in my view, made a fundamental error. Put simply, Ottawa assumes a natural alignment between Indigenous communities and the anti- development elements in the country’s climate change battles.

Consider the major implications of government policies over the last four years: a moratorium on Arctic oil and gas development, the cancellation of Energy East and Northern Gateway pipelines, the stalled construction of the Trans Mountain expansion project, Teck Corporation’s decision to postpone the Frontier oil sands mine, among other actions have deterred foreign and domestic investment in energy projects.

There are other examples.  Bill C-69 expanded substantially the reach of environmental and social assessment processing, a well-intentioned effort that will nonetheless add considerably to the cost and time involved in reviewing and approving energy projects. The inconsistent handling of the Wet’suwet’en protests, with government officials prioritizing discussions with a small number of regional Indigenous protesters over the many pipeline supporters represented by elected Indigenous governments, provides another illustration.

The 150 First Nations of the Indian Resource Council from across Western Canada have a different view.  We are passionate about the environment and will defend our traditional territories to our last breath.  But we have worked with the oil and gas industry for generations and know how to cooperate with companies and governments to protect our lands.

The reason First Nations fought so hard for autonomy and for a role in the resource economy is so that we could make decisions about development in our territories.  We do not want Ottawa denying us the first chance at real and sustainable prosperity in more than a century.  In the current environment, non-Indigenous protesters and environmentalists have been given more of a say in Indigenous economic futures than Indigenous communities themselves.

The Government of Canada is on the verge of making another leap into the policy unknown through the integration of UNDRIP into Canadian law. First Nations applauded when the United Nations passed UNDRIP in 2007 and cheered when the government of Canada signed on in 2010. UNDRIP provides a roadmap toward a more promising and just future for Indigenous peoples.  The document has 46 separate articles, covering everything from education and languages to protection of women and children.  As a strategy for improving the quality and life and the sustainability of Indigenous communities, UNDRIP is without parallel.

But the debate over UNDRIP hinges upon a single phrase: “free, prior, and informed consent.”

Opponents of resource development have weaponized a narrow interpretation of this one provision, claiming that it provides dissident groups within Indigenous communities with the authority to fight projects that actually have broad community support. It will take years for the Canadian courts to define the authority and limits of free, prior, and informed consent.  In the interim, the concept is being used freely by environmentalists and anti-development protesters to argue that Indigenous people–and not necessarily Indigenous governments–have the right to shut down projects.

Should this proceed–and it would clearly accelerate should the government embed UNDRIP in Canadian law–Indigenous economies could suffer grievous harm.

In a commercial sector that has been affected by shifting regulations, price-uncertainty, delays in government decision-making, and strident environmental opposition, the government of Canada’s interest in UNDRIP is worrisome. First Nations are eager to participate in the energy sector on just and appropriate terms, negotiated with companies, and to work within the parameters set by provincial, territorial, federal, and Indigenous governments.  Many First Nations are working in the industry, expanding business engagement in the sector, and adding substantially to their local and regional economies.

First Nation governments in Canada have incredibly complex and busy complicated agendas, tied largely to the legacies of colonialism, government control, and discrimination.  Many communities, tired of an over-reliance on the government of Canada, are eager for more own-source revenues and the freedom to act that comes from prosperity.  These communities decided that participation in the oil and gas sector was a viable–sometimes the only economic option.

Many First Nations across the country want to proceed with energy development. They do not want additional barriers.  The hasty and incautious introduction of UNDRIP could scare away investment or delay major projects.  Working with Indigenous leaders and communities, Canada can turn UNDRIP into a transformational piece of legislation over the years.

In the current circumstances, where UNDRIP is seen as an anti-development mantra, the constructive potential of the United Nations Declaration will almost certainly be lost, along with thousands of Indigenous jobs, countless business opportunities, and the much-desired financial independence of First Nations communities.

Stephen Buffalo is President and Chief Executive Officer of the Indian Resource Council of Canada. Mr. Buffalo is a proud member of the Samson Cree Nation. He graduated secondary school from Athol Murray College at Notre Dame, Saskatchewan. Mr. Buffalo holds a B.A. from Medicine Hat College and B.M. from University of Lethbridge. He worked for Peace Hills Trust for 15 years, most recently as the Regional Manager for Southern Alberta.