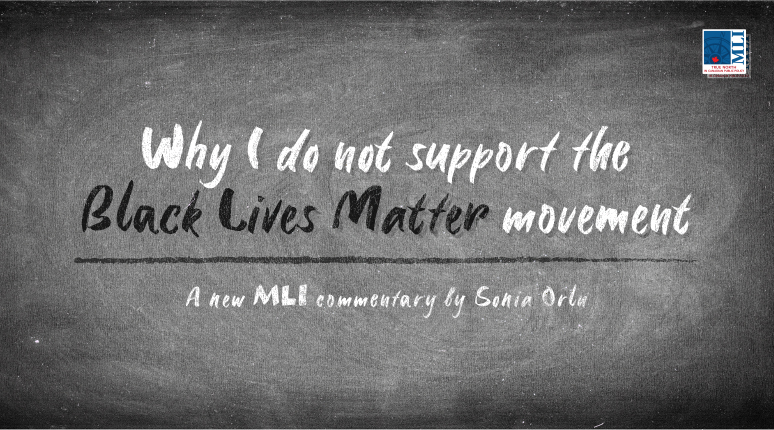 Orlu: Why I do not support the Black Lives Matter Movement

By Sonia OrluMarch 4, 2021No Comments

OTTAWA, ON (March 4, 2021): “I remember being visibly shaken to tears because I just could not fathom the callous disregard of an unarmed, young Black life shot to death and lying lifeless on the street like a rag doll.”

These are the words of Sonia Orlu. Once an ardent proponent of Black Lives Matter (BLM), her support for BLM has eroded over time, to the point where she no longer associates with the movement. What caused this change?

In a new MLI commentary titled, “Why I do not support the Black Lives Matter movement,” Orlu examines the movement and how it has engaged in a radical culture shift, moving toward far-left and Marxist ideology. She takes a critical look at some of the assumptions and remedies demanded by this movement she once subscribed to. This commentary is the first paper released under MLI’s Speak for Ourselves initiative.

“Sonia Orlu’s authoritative commentary demonstrates that not all people of colour ascribe to a singular ideology as so promoted by the media elites and, in fact, there is a diverse range of perspectives that need to be spotlighted,” says MLI Senior Fellow Jamil Jivani. “We could not be more pleased to publish this commentary on Speak for Ourselves.”

Orlu makes clear that Western countries are not “post-racial utopias.” Inequality in both opportunities and outcomes persist due to racist policies from the past that still exist in some forms today.

For example, Orlu notes that Black people in the US and Canada, men especially, are arrested and convicted at higher rates than their white counterparts for non-violent offences, especially drug-related charges. These disproportionate convictions are an example of the kinds of social, political, and economic policies that harm Black persons, their families, and communities.

However, Orlu argues that no definitive conclusion can be reached on more animating issues, such as policy brutality. As she notes, the existing research has not ‘proven’ the hypothesis that (white) racism is to blame for racial disparity in the use of force. While there is a need to discuss police reform, Orlu contends that the divisive approach put forth by the BLM movement is counterproductive.

“Maintaining a society where all citizens are treated as equal and accorded due process is the paramount duty of every self-proclaimed liberal society,” writes Orlu. “However, a movement that resorts to emotional blackmail and actively encourages compelled, performative speech and the silencing of reasonable dissenting perspectives does more harm than good for this end.”

Orlu explains that BLM and their White liberal allies have monopolized and weaponized the mainstream debate on race. This has silenced any diversity of ideology, values, or dissenting opinions on these issues.

Similarly, Orlu argues there has been a corre­sponding extreme reaction from some individuals on the Right of the political spectrum in their dismissal of the need for police accountability and reform. “This has made the conversation around race and police brutality increasingly frustrating with little to no potential to reach common ground on what the facts are,” notes Orlu.

“One can support demilitarization and denounce the arbitrary and lethal use of force by the police without demanding abolition, [and] the address and redress of structural inequality without violently tearing down the pillars of the system,” says Orlu. These things can be done “while advocating for and uplifting Black individuals without supporting the Black Lives Matter movement and organization.”

***
Sonia Orlu is a PhD student in Political Science at Simon Fraser University, Vancouver. Her academic research focuses on state sovereignty, its contemporary evolution and its implication for human rights, specifically in Africa.